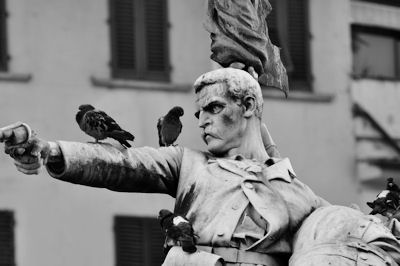 It’s three blocks from where my Cantonese in-laws live since they moved out of Chinatown.  Bridgeport, so-called: no bridge, no port, but working class.  I’d thought the neighborhood tough—afraid to go out, lock your door at night.  But one couple on the corner stools, who could be Torres or Rodriguez, toasts me with pints of MGD, while guys with broad faces of Poles wear White Sox caps and watch Notre Dame football on the one working TV.  A mixed race couple plays chess near the back exit, its locked door and sign that reads: Must Remain Unlocked During Business Hours.

When my stepsons, young men now, invited me to go shoot pool, I said, “What?” thinking I’d misunderstood.  Thanksgiving night, snow in the air but not on the ground, all three of us refugees from cousins, uncles, and Mom (a.k.a., my wife), we’re visiting from out of town, shooting against a couple guys named Vito and Cesar who belong to this parish, orderlies at the hospital we walked past to get to the bar.  Crucifixes dangle from their necks as they eye the corner pocket.

Notre Dame goes ahead by a touchdown (“They’ll lose,” Vito says, not looking up from his shot).

Leftover turkey cools throughout the neighborhood, and we’re warming up in the neon beer sign light. The balls rattle alive when Vito breaks, explode like neutrons, but nothing drops.  The older patrons have these days off work.  Some argue about bowl picks and the Bears; the young buzz on cell phones, like my sons: Are you there? Are you in Texas? No, dude, I’m in Chicago, shooting pool and doing shots.

Richard J. Daley’s beneficent gaze softens the cone of light above the pool table, Mayor Daley the first, in his black suit and red tie.  The white below the iris in each eye gives him a hound-like steadfastness.  He’s dogged for the contentment of his ward.  Like Mary (a.k.a. the Virgin Mother) he looks skyward for bliss, and perhaps for votes, keeping watch over the neighborhood, over Vito, Cesar, the bartender, and us, as Southern Cal threatens to score.

“Completed in ’53, retouched 2000,” the inscription below the portrait reads.”  The year I was born and the year I realized I was as happy as I’m likely to get, unretouched and unrevisited.  For this is Bridgeport, no bridge in sight, no port of call for any ship.  We’re on the green felt sea, on the exit ramp of life, we older patrons, the evening of this holiday my in-laws don’t celebrate—rice, curried lamb, and bean curd sheets for our turkey day repast.  But I’m not Cantonese, not ethnic working class, not Hispanic and sitting at the corner stool. There are a lot of things I’m not, here without my wife (a.k.a., all that I have in this flat world), with my grown sons and the good shots they leave the other guys.

Notre Dame scores again as time runs out. I’m going to bank the six off the rail and set up the eight in the side.

Richard Terrill is the author of two collections of poems, Almost Dark and Coming Late to Rachmaninoff, winner of the Minnesota Book Award; as well as two books of creative nonfiction, Fakebook: Improvisations on a Journey Back to Jazzand Saturday Night in Baoding: A China Memoir, winner of the Associated Writing Programs Award for nonfiction.  He teaches in the MFA program at Minnesota State University, Mankato, and works as a jazz saxophone player with the Larry McDonough Quartet.