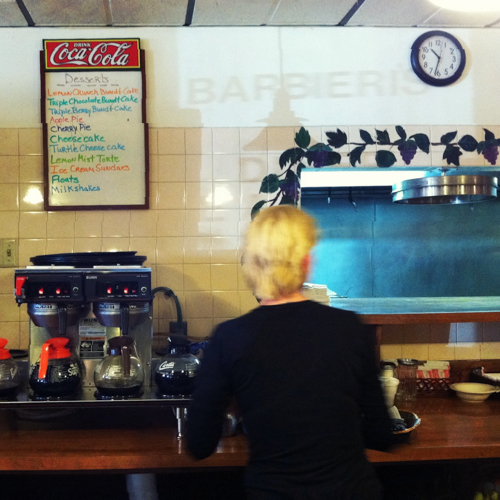 It’s true, I find signs because I look for them, but there are more carcasses roadside, half-baked by the sun, more cops, all gunmetal gray and flashing blue lights—stop, slow down—so I park under a live oak outside an abandoned gas station just west of Florence, South Carolina, and let smoke drip from between my fingers. A fat, black bumblebee throws itself at my windshield. If I keep driving, I’ll get to the Motel 6 in Newport, Tennessee, by sunset—you’ll be late, but I’ll wait for you in my truck, sipping Dickel to calm down.

We spent years somehow in the minutes we found: clumsy hunger on a dirt road, midday desperation when your house was empty enough. Years, until you were nothing but a fingertip’s bruise on the outside of my right breast, the shadowy indentations of teeth above my shoulder blades; and I was just a single strand of auburn hair woven into your pillowcase, weft for a brimming warp, a question that would dangle if your wife ever plucked it from the sheets, held it between you, saw that it was too light, too long, not hers.

I told myself distance, if nothing else, would keep me still. Boxes scattered across my apartment, and we paired our words: last time, no more, fuck you, fuck me. This morning, two months and two states between us, I watched the small black letters of your name thrash against my cell phone screen. I watched my finger, in acceptance, slide across the slick glass. How far I was willing to go—back over the Blue Ridge, almost the entire way home.

The steady stream of smoke from my cigarette slows; the black bee abandons the windshield for soft pollen. I stare at my pile of supplies—the half-empty bottle of whiskey, two plastic heels piercing the side of a grocery sack, a bottle of cheap perfume. I’m not going to Newport. Instead, I’ll sit here until my cigarette ash sinks through my skirt, smolders and lights, burns me up under this tree in South Carolina, until I am nothing but char on the bark.

Anna B. Sutton is a writer and publisher from Nashville, TN. Her work has appeared in or is forthcoming from Third Coast, DIAGRAM, Quarterly West, Barrow Street, Tar River Poetry, Superstition Review, and other journals. She received her MFA from UNC Wilmington and a James Merrill fellowship from Vermont Studio Center. She is the co-founder of The Porch Writers’ Collective, web editor at One Pause Poetry, poetry editor for Dialogist, a reader at Gigantic Sequins, and a publishing assistant in Winston-Salem, NC. For more information, you can visit her website at annabsutton.com.

previous post You’re the Tower and I Am Rapunzel, She Says
next post For Great-Aunt Jeannette, Who Donated Her Body to Science