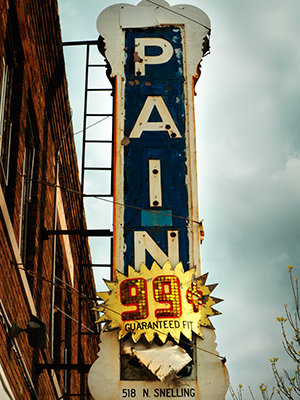 The person on my voicemail was a man. His voice was high, higher than most men’s voices I’d heard before, and he spoke slowly, as if reading off of cue cards. I didn’t know when the call came in. My cell phone never rang. Rather, in that late morning, the phone vibrated, informing me of an awaiting message. A voicemail.

He started: “Hello? I think this is your number. I hope it is.”

I was in the kitchen, looking out over my small garden. The weather in Park Slope had turned cold, with the temperature dropping thirty degrees overnight. It was an unusually bitter autumn. Charlie, my black Labrador, played in the snowy backyard, barking at a neighborhood tabby. My wife, Samantha, was at work, and I had grown accustomed to having the house to myself during the day. In the evenings I worked as an editor, and I imagined Samantha, too, valued the undisturbed time. I pressed the phone against my ear.

He said: “I’ve been wanting to call.”

A crash came from outside. I opened the backdoor to find earth and terracotta spread from fence to door. Charlie stared up at me, tail wagging and mouth open. He looked like he was smiling. His thin legs trembled in the snow. I turned and pointed into the house; I made my stern face. Charlie ran past, nails clicking against the hardwood floor. I shut the door and began the voicemail again. The second sentence struck me this time—whose number did he think this was? The greeting lacked my voice, telling callers in a robotic, female voice that they had reached this number and to please leave a message. The caller, it seemed, thought the number was correct.

He said: “I’m not really sure what to say, though. It’s been a long time. I hope you’re well.”

The man didn’t say his name. This meant, I assumed, that the intended recipient of the message should recognize his high, almost shrill voice. A pause came, and I heard clanking in the background, repetitive and echoey, like the ping of a baseball against an aluminum bat. I didn’t know what this meant. I imagined a college baseball player, tall and sinewy, sneaking away from batting practice long enough to call. Twelve seconds of ambient sound filled the line.

He said: “You should call me sometime. My number hasn’t changed.”

Our small Brooklyn house was a duplex. I walked upstairs, phone still pressed to my ear, to begin my day; my desk was there, mostly due to the unspoiled light that poured in through the large bedroom windows. I spent mornings and afternoons writing and storyboarding and staring out those windows at the South Slope. The neighborhood was middle class and largely Hispanic, a stark contrast to those living in the multi-million-dollar brownstones just a few blocks north. The buildings and residents hadn’t changed in years, leaving the area one of the few pockets of the city, at the time, to remain. I sat down and turned on my computer. The neighbor’s children, Edgar and Lola, played hide-and-seek on 21st Street. I liked that little had changed over the years.

He said: “This—I wish I knew the right things to say, but I don’t. I miss you, Samantha. I still love you and I need to see you. Please.”

The click of the line going dead, of the message ending, rattled in my head, like everything else had been scooped out. I folded the cell phone and placed it on the desk. Things that were supposed to be permanent felt inconstant. The children outside laughed and called out words in Spanish that I could not understand. I opened a blank document and hoped writing would be a distraction. The screen was white and I felt sick. Downstairs, at the back door, Charlie scratched to go outside. The tabby meowed. They carried on in this way, teasing one another.

Danny Goodman is a young writer who loves a good bowl of pad see ew. He recently completed his MFA at the University of New Orleans and teaches both creative writing for the Gotham Writers’ Workshop and English for SEO’s High School Scholars Program in NYC. His work has appeared in various places, most notably CellStories and Ducts, and he is a two-time recipient of the Samuel Mockbee Award for Nonfiction. He lives in Brooklyn.