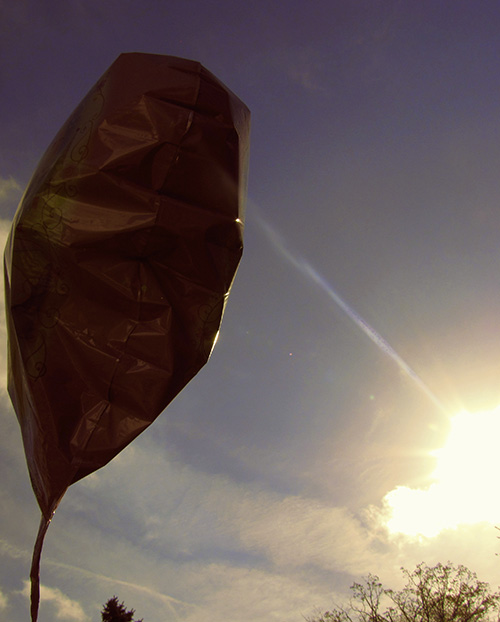 I wish I could write like Russell Edson because then I could show my husband standing in the kitchen like a tree that lost its leaves all at once. Or like a rock in the living room that doesn’t notice the lichen. And my daughter would be a bird in the tree, and my son would spend hours climbing on the rock, inspecting the lichen and watching the bird. In this scenario, I might bake some cookies and spread a picnic blanket in the living room and lean against the rock, which might or might not moan, and when the children weren’t looking, I’d tell the rock how much I missed him. Also, if I wrote like Russell Edson, I could show the family I grew up in, in one of the houses I grew up in, which would be a helium-filled environment, which would explain why three of us were forever floating several feet above the ground, but which wouldn’t explain why the forth one, the one that produced all the helium (a toxic variety), never floated, but instead forged a deeper and deeper relationship with gravity. At least, from up there, we’d be able to see the part in my mother’s hair, the paleness of which would remind us that she was vulnerable, as all human beings are vulnerable.

On the other hand, sometimes I wish I could write like Thomas Bernhard, because then I’d be able to put my still enormous reserves of helium-engendered rage to good, artistic use in a fairly broad, less familial, more political context. But more than writing like him, I wish Thomas Bernhard were my brother, and, of course, I wish he were still alive. If Thomas Bernhard were my brother, I’d make him chocolate soup and knit him cashmere watch caps, and listen patiently to his stories, greedy for his unsmiling humor. If Thomas Bernhard were my brother, maybe he could teach me how to condemn things more effectively and more articulately which would be an enormous relief, a great strength, and above all a useful (though probably unpopular) trait. I’d ask, How is modern America comparable to pre-Nazi Austria? And Thomas Bernhard, no doubt, would provide a chilling explanation of the ways in which complacency is related to cowardice, and conformity to cruelty. I’d tell him—but only if I were slightly drunk, because I’m ashamed of this failing—that I’d like to connect my own experience to the world outside of me, but I don’t know how. My brain works more like Russell Edson’s, when I’m lucky, and less like his, Thomas Bernhard’s. I might confess, if I were slightly drunk, that once or twice the President of the United States has shown up in my dreams, but instead of asking him important questions, I make him things to eat. Oh, Thomas, I’d say, I was raised in a house full of helium. There was mental illness everywhere—you know what that’s like. And verbal abuse, you know about that, too. Also, drunkenness, and violence, and all I ever did as a child was try to avert my attention from these things for as long as possible. Now that I’m an adult, a middle-aged woman with a spray of grey hair above one eye, I sometimes think it takes every ounce of strength I own just to be okay, just to be adequate, to bake a few cookies, occasionally, for my children, and to comb the lichen from my husband’s beard. But this world we live in is small and large at the same time. It’s full of history I don’t understand and currents of power that are as mysterious as they are terrifying. How do you condemn what you can’t comprehend? These days, the seasons expand and contract in ways nobody can predict; the human population swells obscenely; and every minute of every day, people step over corpses they can’t even see. Surely the sugar I put in my tea this morning had someone’s blood on it. Or maybe it’s my foam rubber clogs, made in China, that are bloody, or the microchip in my cellphone… Tell me, darling, how do you like your chocolate soup?

Then, of course, there are days (today’s one of them) when I wish I could write the way Harpo Marx talked. Or the way Buster Keaton smiled. Or the way Charlie Chaplin walked backwards and unheeding into speeding trains and other silent, elaborate forms of disaster.

Kim Adrian‘s stories and essays appeared in Tin House, Agni, the Gettysburg Review, Crazyhorse, the Raritan Review, and elsewhere. Among the awards and recognitions she’s received are a P.E.N. New England Discovery Award, an Artist’s Grant from the Massachusetts Cultural Council, and three Pushcart Prize nominations. She teaches creative writing at Grub Street, in Boston, and is currently at work on a memoir.