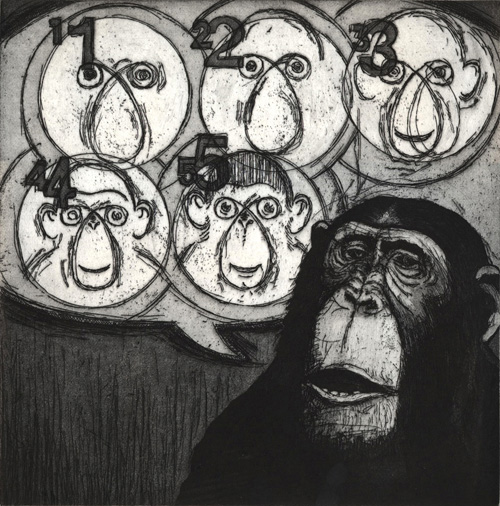 By the time they slid out of the cooler and onto our front porch, the ice surrounding their slippery bodies was nearly melted.

“Six silver Steelhead. Fresh out of the Klamath River,” announced my mother.

They were sterling, pewter, and black. Yellow-eyed and long as my legs.

My mother pulled out a buck horn knife and made a line, clean and silent across the soft belly. A drop of rich red splattered between her pink toenails. She shoved the knife in deeper. I heard the sound of thin bones snapping like taut strings, the steel point of the knife scraping along a fine backbone. Her fingers full of turquoise rings, yanked at things inside of the fish.

I was afraid of her. She wasn’t predictable when she was drinking.

In her hand she held out three round fleshy balls. I winced. She pushed them closer to my face. They were like antique marbles, giant freshwater pearls—rare eggs with deep green and creamy swirls. They glistened in her palm.

“Aren’t these amazing?” she said, squeezing my arm. I didn’t want to touch them. And then I did. Fish guts. Soft, wobbly, and wet.

Perhaps now, so many seasons later, and her gone, I understand it better.

It was my mother who taught me beauty could exist in anything.

Melissa Cistaro’s stories have been published in the New Ohio Review, Anderbo.com, Sparkle and Blink, and in the anthology CHERISHED: 21 Writers on Animals They Have Loved and Lost. Most recently her essay “The Undertow” was a semi-finalist in the Notes & Words national essay contest.  She lives with her family in San Rafael California.