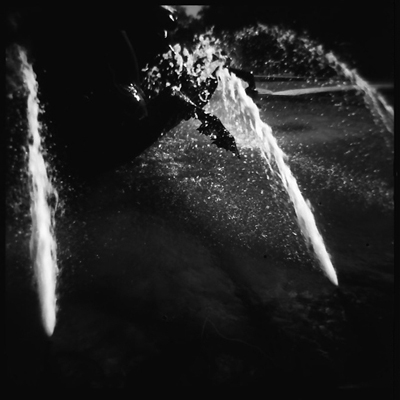 The wound on the horse’s thigh was the size of a discus. Blood ran down his bent leg. It was hard to see in the dark. It was very cold.

A stranger had brought the horse over to Teddy’s trailer and said he had been riding that night and had an accident. My brother and I were being looked after by Teddy because some evenings after my mother left us, my father just needed to be by himself.

Teddy had a bunch of cowboy friends over, and they were all drinking too many beers. He got down on a knee next to the horse and put his hand out and poked the tender flesh. The horse reared back and screamed. His neck jerked in a slant toward the charcoal sky. The stranger had hold of the reins and pulled down hard on them to keep the horse from moving much. Teddy poked again with a smile on his face. All of the cowboys laughed.

I moved behind them as they stood and pointed, crossed and un-crossed their arms. Something about the dark made me feel invisible, untouchable. None of the men noticed me as I circled, staring at the giant beast, barely visible in the small bit of light coming through the curtains of the trailer windows. Teddy told the stranger he’d be back with a bucket of water and some gauze. He walked away, but not in a straight line.

I looked from the horse over to my brother, who was holding the trailer door open with a hip, both hands gripped together at his stomach. He was seven, two years older than me, but always afraid to get near something like this. I stepped closer to the horse.

I had my face up near the horse’s belly when I heard Teddy coming back with the bucket of water. He dropped the gauze and bandages to the ground and yelled. He must have thought I was going to do something by the way the men had gone silent and were watching me as I squared my shoulders and moved closer to the horse. There was a lot of grass between Teddy and me, and I ran behind the trailer to get away from him. When I was around the back of it, I could hear him grunting and getting closer.

Teddy walked over. He ground his teeth together so hard I could see the muscles in his jaw wriggle. He took the bucket up high in his hands. I didn’t know what was coming, what he was capable of, so I tucked my head in my arms and closed my eyes. Teddy growled and dumped the water over me. Then he threw the bucket into the dirt and took me by the arm. Teddy dragged me over to the horse with the stranger and the other men right behind.

“This funny?” he said, letting go of my arm and taking hold of the horse’s reins. He jerked hard on them so the horse’s neck was pulled. “You think this is goddamn funny?”

I watched the wounded animal’s ribs move in and out. For the first time, I noticed the horse’s breaths could be seen, any of our breaths. I looked at Teddy with his tense muscles and stiff grip on the leather reins, the other cowboys gathered behind him like a flock. Then I nodded over my shoulder at my brother who had moved behind the closed screen door. He had a painful look on his face, the same kind of hurt my father showed now when he thought nobody was watching.

Teddy stepped closer. I could hear his heavy, drunken breathing, almost feel it. He had one fist clenched tight to his side like he was itching to hit me. I was soaking wet and shivering in the middle of the night, but I wasn’t looking for warmth. All I wanted to do was reach out and touch the wound. I moved like I might.

Jonathan Starke has essays published or appearing in Fourth Genre, Michigan Quarterly Review, The Missouri Review, The Normal School, The Pinch and Post Road. He’s also the co-founder and editor of an underdog literary journal called Palooka. He’s currently working toward his MFA in creative writing at Colorado State University.