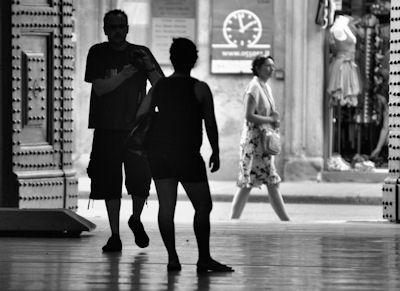 I sit in a wheelchair alone in a dim hallway. I am waiting and it seems an eternity, parked against a wall, awkwardly abandoned in an anonymous dark corridor while the technician busies himself until one of the giant machines opens up. For once I have nothing to read and no one to talk to, nothing to distract my wandering mind. I am alone in the Nuclear Medicine Wing, and I don’t know what to do with myself. I don’t have my cell phone, no way to catch up on my email. I don’t have a newspaper to read. There is no waiting room with dated magazines. I don’t know where to focus my line of sight. I am embarrassed, sitting here, alone, surrounded by washed-out tones of hallway brown, swallowed by depressing walls, products of low-wattage fluorescence and insufficient light and a wandering mind. They want to know if the cancer has infested my bones yet. And so I wait. It’s something we’re all interested in, me as well as the doctors, and I’ve got nothing better to do. So I wait. If I smoked, now would be a good time. People in white coats and sneakers pass by without looking at me–technicians and interns with important things on their minds, IV infections and pain meds, rushing along in knowing strident gaits, too busy to look left or right. Others loiter in the distance, in blue outfits that could mark them as janitors except that they push people like me through heavy double doors. I sit in a muted trainrush of silence, nowhere to go, waiting, wondering if the tumor has crept heartward, if it has gone swimming through my lymph nodes and settled like an alien colony elsewhere in my body. The doctor holding up his thick-boned fist in the emergency room, a tumor this size he says. The black socks of old men shuffling. The boy across the way, wailing. And now this, this hollow silence and lonely waiting. It’s the occasional patient, seemingly out for a slow stroll, that gets to you. The medical employees swarm like worker ants in a colony and their ignoring you is to be expected. Even the loiterers, with their studied indifference who keep their distance. The patients that occasionally pass through, though, these are different. They ignore nothing. They are like motorists staring intently, straining their necks, until the moment of passage, and here they avert their gaze, not wanting to intrude on your privacy, such as it is, heaped there in your wall-humped chair with nothing to distract your wandering mind. This doctor with his fist held up. This boy with his blood-ruined washcloth. In these particular hallways, they want to know even if they don’t look. They want to compare your fate to theirs. There is strength in that, there is life in the comparison. An elderly man approaches, held at the elbow by a younger middle-aged woman. Their pace is slower than the others. As they approach, she intensifies her gaze on him, but he does not veer from looking in a straight line to a distant unregistered place down the hallway. I look down. I am embarrassed to look at him. I look away, toward the closed double-paneled doors with the nuclear warning signs. It seems they may never pass, this old man and the woman at his arm. He is a dead man walking. I know this. We do everything in our power to avoid each other’s gaze, me and the younger woman at his arm. The old man pays no attention to either of us. I am suddenly aware of how much weight I have lost in recent weeks. I can feel her looking at me even if her eyes remain locked on her father, and I am embarrassed. I wonder if my eyes are sunken in this miserable light. I am angry that they did not let me bring a magazine. I am alone in this weak light, abandoned, and I want to speak of inane things with my wife, to hear, once again, that our four-year-old daughter has developed an unusual fascination with pre-historic sharks–that should one attack, you should run, no point trying to talk to them because they don’t speak English. I wish that this old man and his daughter would pass. It is becoming difficult for us to avert our eyes from one another, me and this woman on the old man’s arm.

Christopher Battle is a freelance writer, and has been published in a variety of literary and cultural magazines and journals such U.S. News & World Report, France Today, Arkansas Life, Fewer Than 500 and Ozark Historical Review. He is former journalist and editorial writer and lives in Alexandria, VA.