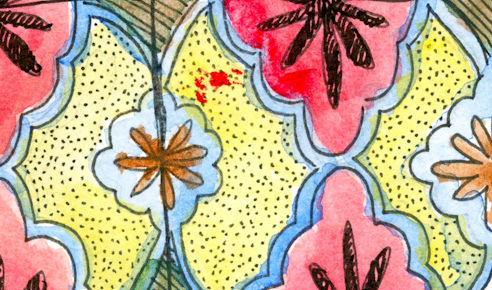 There was the year micro-braided, brokenhearted girls sang Ashanti in prayer circles, their sopranos trapped in their sinuses, the incantation to be unfoolish neutralized by the next shape-up with a pair of Butters. Then the year triple-X-tee’d boys-will-be-boys broke down the name of Osama bin Laden into call-and-response, pounding the battered faces of lockers to punctuate each syllable. Sometime in between all that, I had my first and last boyfriend.

He was City Blue down to the socks. Cords of muscle coiled like concertina wire under his brick-brown skin. Irises like dollops of burnt sugar would melt the size-2 Baby Phat right off my peekaboo hips. Whenever his mother worked a double at the hospital, I’d be in her kitchen baking brownies in nothing but a wife beater, just to show her son I could be that girl, his girl, the girl latched onto a boy’s hip as if she’d sprung from it. I wasn’t his first, but I was determined to be his last. I kept my straightened hair shiny as a new penny and swooped it over my left eye like Aaliyah. I got a touch-up every six weeks to mirror the girls who’d come before me and keep pace with the ever eager next-ups.

I never needed to know which brand of relaxer to buy or how to apply it because I had Ms. Jackie. Both my mother and my grandmother had sat in Ms. Jackie’s styling chair, its sleek vinyl as red as Red Hots. By the time I took my place on that throne, the candied cushions had cracked. Ms. Jackie, on the other hand, had stopped aging back when New Jack Swing crackled out of Walkmans. She was shaped like an hourglass that could measure a month of Sundays. The charms on her necklace would shimmy down between her girls and never come up for air. I imagined that lucky silver was slick and warm as blood, and redolent of the baby powder that coated her chest when she opened up the shop in the morning. By nightfall, that confectioners’ sugar would’ve dissolved and her bare, pastry-colored skin would glisten as if it’d been painted with egg wash.

When it was time to work her Marcel magic on me, Ms. Jackie’s toughened fingertips would graze my nape, and I’d tilt my head downward, on cue. The point of her rattail comb would needle my scalp as she cleaved through sheaves of my blown out hair. I inhaled a flurry of scents: the hair care aisle’s ethnic section uncorked; baby powder, Muslim smell-goods; the bitterness of he-ain’t-shit blues, the sweetness of he-put-it-down arias; smoking metal heated just shy of incandescence; and the lingering pungency of relaxer.

Once pleased with the geometry of her parts, Ms. Jackie would relieve the stove of its iron. I’d hear the clink-clink-clank of catch and release, and feel her cooling breath chasing the blackened barrel down the length of my hair. After an hour or three, my strands—lovingly cooked into submission—would cascade over my shoulders like chiffon. Later, my boyfriend would finger-comb my ‘do as Sanaa Lathan dribbled out of a Magnavox behemoth into both of our wet dreams.

One day, as if led by the bridle on my body and desire, I toddled out of the salon, across the cobblestone trolley-tracked avenue, through Acme’s automatic doors, down the feminine hygiene aisle, until I reached a shelf of depilatories. I bought the one that claimed to perform 10-minute miracles. Once home, I set the timer on my Nokia accordingly. My phone sat on the toilet seat lid, and I, on the tub’s porcelain lip, splay-legged. I applied my purchase precisely where it instructed not to.

The blush-pink cream smelled of Saturdays that slid through fingers like Hot Six Oil. The burning sensation reminded me of that time my silken crown concealed an island of active volcanoes oozing piss-colored pus. I watched as the stiff curlicues below my navel began to unwind and bow down like palm trees in the wake of a nuclear blast. My cell chirped: time’s up. Finally! I rotated the showerhead’s dial to power rain and drove all that familiarity down the drain. Now hairless and pimpled, my crimsoned skin straddled pubescence, and felt slippery as if I’d doused it in bleach.
__

Niya Marie is a queer black writer living in Philly. Her work has appeared in Longreads and The Rumpus. You can find her at www.niyamarie.com.

previous post Dear Editor, Who Made the Remarks About Not Wanting Walmart Poems
next post Bewildered Passengers