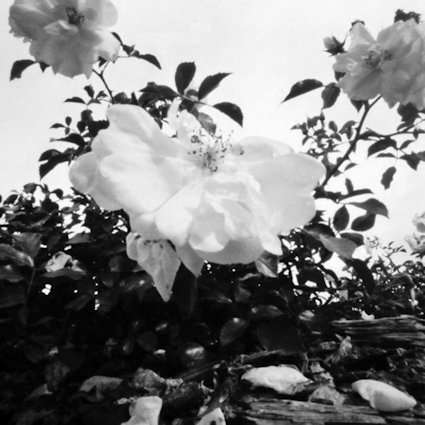 Oscar Wilde wrote in The Picture of Dorian Gray, “It is a sad truth, but we have lost the faculty of giving lovely names to things. The man who could call a spade a spade should be compelled to use one. It is the only thing he is fit for.”

I wanted to be a poet so I could give lovely names to things. I wanted to be Anne of Green Gables, an orphan who disputed Shakespeare when she said, “I don’t believe a rose would be as nice if it was called a thistle or a skunk cabbage.”

Someone had coined the word for rose, had captured the soft essence of the flower in sound. But I didn’t know this other word, this harsh slab of syllable that tasted like copper, that rubbed off on my fingers like coal.

“What is a spade?” I asked my mother.

She pointed to a small shovel in her gardening bin. “It has sharp edges,” she said, “to cut deeper into the earth.”

We were a board game family, not a card game family, but once I opened a drawer in the slender table behind the couch and found at least a dozen packs of playing cards. Some were still shrink-wrapped, others coffee-stained and smelling of the world after bedtime, the world inhabited only by adults.

These were for my father’s poker club, my mother explained, along with the bucket of chips in the basement and the pipes that no one actually lit anymore. “It makes them feel good to gamble,” she said, “even though the winner only leaves with a cup of change.”

I mulled on this image—a cup of change. She meant pennies and nickels, but I thought of witch’s brew, drinking a potion that could alter your constitution, refashion the way your skin draped over your bones. What if, in other words, I had always been a rose, trapped in this cabbage body, answering my whole life to the wrong name?

Later, in college, we drew cards to determine who went first at everything. “Ace is high!” everyone agreed, and the ace of spades was understood to be the highest.

“Didn’t you ever play cards growing up?” my roommate asked, shuffling the deck in her fancy, accordion way. I shook my head. “I think you’d like them, the cards themselves. Every one has a story, a little biography.”

The ace of spades: card of the black shovel, sharp and efficient, sometimes called a spadrille. High-ranking card, paradox card, the victor and the omen at once. Card of death. Is this a coincidence? The black shovel digs the grave. The dead escape the grief that plagues the living.

My mother, a teacher and a gardener, tended children and roses all her life. She clipped away thorns and made striking arrangements. She was good with the flowers, too. The doctor told her it was unlikely she could ever have a child of her own. Then, he paused and whispered the black-shovel word: cancer. She was thirty-three, beautiful in her thistle-way. She believed the ace was high. She hedged her bets and made a wager.

In my first memories of my mother, she is weak and pale, returning from the hospital in my father’s car. She is propped in bed with pillows at her back, a tray for breakfast, lunch, and dinner. We put a rose in a vase and leave it on the bedside table.

I will not understand for many years how the surgeon spade—for it is a verb also—deep into her body, cutting away the tumors, razing the soft flesh of my origins. I will not understand for many years that when she says, “You are my only child,” she means, You are my only chance; that when she laments, “I gave up everything for you,” she fears I have not been a safe bet after all.

And then I will understand, like the presto moment in a card trick: When my father says, “You’re killing your mother with this,” he means, You’re going to be the death of her after all. We should have called you the spade you are.
___

Julie Marie Wade is the author of ten collections of poetry and prose, including Wishbone: A Memoir in Fractures, Small Fires: Essays, Postage Due: Poems & Prose Poems, When I Was Straight, SIX, Catechism: A Love Story, Same-Sexy Marriage: A Novella in Poems, and the forthcoming The Unrhymables: Collaborations in Prose, co-authored with Denise Duhamel. A recipient of the Lambda Literary Award for Lesbian Memoir and grants from the Kentucky Arts Council and Barbara Deming Memorial Fund, Wade teaches in the creative writing program at Florida International University and reviews regularly for Lambda Literary Review and The Rumpus. She is married to Angie Griffin and lives on Hollywood Beach.