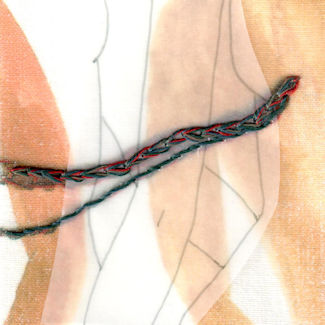 On the bus from LaGuardia Airport to Grand Central Station I’m thinking about the night, thirty years ago, with the boy who lived in Hell’s Kitchen. On 57th Street, in an apartment on the 57th floor, with a view of the Empire State Building.

He was Cuban, this boy, with bright blue eyes, and his parents were away for the weekend, visiting relatives in Miami. I had no idea then what it all meant, the cramped apartment, the way he spat the name “Fidel,” the sense of loss that hung over the family. His mother was a secretary at the neighborhood Catholic church, his father a tailor.

That night in the apartment it was the blue-eyed boy, his two older brothers, and me, a seventeen-year-old girl come down on the train from Poughkeepsie. For dinner we ate homemade eggrolls, all four of us crowded onto a wrought iron balcony in the midtown sky. Later, the brothers went out dancing, and in the middle of the night, maybe 2:00 a.m., one of them came home with a couple of friends and a girl who was drunk. The blue-eyed boy and I got out of bed and said hello, and the brother announced that this girl had split the crotch of her pants on the dance floor. She was blonde, I remember, and smiled in a silly way, as if she didn’t quite know who she was.

“What are we supposed to do about it?” my boy said, not unkindly.

The brother glanced at me. “I thought somebody might be able to sew them for her.”

As it happened, I knew how to sew. Not well, but enough to keep a pair of pants together for a night. And of course there was plenty of thread in the home of a tailor.

It was the 1980s, our pants were all too tight, so I wasn’t surprised to discover, when the girl came out of the bathroom wrapped in a towel and handed me her jeans, that the place where they’d split was wet and yeasty. The seam kept slipping from my fingers as I sewed, and as everyone talked and laughed around me, I began to feel like the workhorse version of Cinderella preparing her stepsister for the ball. But I wanted the boy to appreciate how willing I was to pitch in, to adore me even, so I didn’t complain. After the girl was dressed again and the kitchen had emptied out, he pulled me onto his lap and kissed my neck. “You have many talents,” he said.

The next day he borrowed a friend’s car and drove me to Grand Central Station, which I know now would have been a fine walk, and that was the last I saw of him. We talked on the phone a few times, and months later he called to let me know, in a roundabout way, that he had taken up with the friend whose car he had borrowed, a guy so handsome and sweet I’d have taken up with him myself if given the chance.

All these years later it’s hard to remember how it felt to be in love with the blue-eyed boy, but I remember very clearly that girl’s jeans, turned inside out, seam against seam as I sewed through the moist denim until it wouldn’t come apart again. This is not the sort of detail you share, not with the guy, not with the friend who picked you up at the Poughkeepsie train station and asked for every detail of your weekend in the city. But it’s the kind of detail that becomes permanent, bubbling up sometimes when you least expect it: the moisture, the needle, the sense that desire is everywhere, all the time, and the seam between past and present is porous. She would be in her fifties now, that girl, still older than me.

__ Michele Morano‘s essays have appeared in journals and anthologies such as Best American Essays, the Georgia Review, the Missouri Review, Ninth Letter, and The Fourth Genre: Contemporary Writers of/on Creative Nonfiction. She is Associate Professor of English at DePaul University and directs the MA in Writing and Publishing Program.