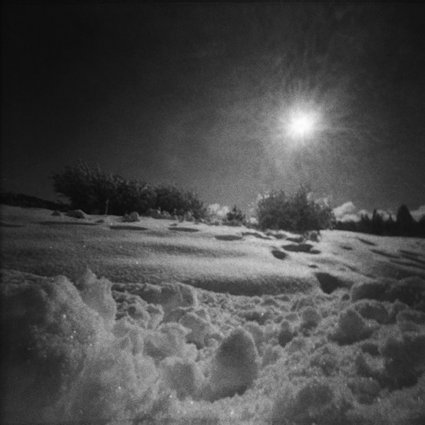 There’s an old photograph of me and my dad, taken one day during hunting season. Daddy stands tall in the picture, his legs apart, the butt of his shotgun braced between them. The barrel points toward the wintry gray sky. He’s wearing his red-and-black plaid hunting jacket and a hat with furry flaps. His eyes are clear. His hands are steady.

Daddy is going hunting, and I’m playing hooky so I can go with him. I stand beside him in the photo, bundled in a red wool coat and scarf, snow pants, and boots. I’m eight years old, on the cusp of my rough-and-tumble tomboy years, and Daddy is anxious to teach me everything he would teach a son, if only he had a son: how to hunt, fish, and fight; when to be tough and when to be tender; how to live by your wits.

Daddy looks straight into the camera lens, a boyish, lopsided grin on his face. There is a sterner, more adult expression on mine. Perhaps I’m reviewing the rules of gun safety in my mind or wondering if truant officers can put you in jail. There is no sun, but I’m squinting.

Our bodies lean lovingly toward one another in the photo. Daddy’s right hand, where it rests on my shoulder, nearly covers it. Whenever he takes me hunting with him, he calls me his “Partner.”

I love our winter excursions into the snowy woods, where we stalk wild rabbits and gray squirrels and ring-tailed pheasant. I walk stealthily behind him, carefully placing my small feet into the large tracks his boots have made in the snow, until he stops and takes aim. I don’t even flinch when the blast of the shotgun sounds and a startled squirrel is blown from its leafy nest, high up in the bare outline of the trees. The winter-brittle branches snap as the squirrel falls. It lands in the snow with a soft plop, reddening the whiteness, steam ascending from its scattered guts.

“Guess we got him, huh, Partner?” Daddy says.

“Uh huh.” I pick the squirrel up by its tail and drop it into the burlap bag I’ve been carrying. I’m trying hard not to make a face.

Later, after Daddy has shot his limit—after the white haze of the sun has sunk behind the tree-lined hills—he picks me up and carries me, along with the shotgun and the sack of tattered animals, through the deep snow, back to the road where Old Yeller is parked. I sit in the front seat, next to Daddy. The animals lay in the burlap bag on the floor in the back.

Daddy starts the car and throws the heater switch. I get his Pall Malls and his Zippo lighter from the glove compartment for him, and his silver-plated flask. While the engine warms up, he lights a cigarette and takes a few swigs of Jim Beam. He wipes his mouth on the back of his sleeve, then gestures to me with the flask, winking.

The whiskey sears my throat, makes my eyes water and my nose run, and I shiver as it goes down. But the whiskey warms my body, just like being called his “partner” warms my soul on these snowy winter days.

We drive home in the dark purple twilight, the heater melting the snow off our boots, our faces faintly green in the light from the radio dial. “You did a good job out there today, Partner,” he says, patting my leg. I smell the whiskey in the cold clouds of his breath when he says it. I smell the blood of the animals behind us, and the blood of those yet ahead.

Sondra Kline is a student in the Creative Nonfiction MFA program at Bay Path University. “The Cherry Red Motorcycle,” her first CNF publication, appeared in the spring 2018 issue of Six Hens. “Blood & Whiskey” is her second. She was a columnist/contributing writer for Art Gallery International, U.S. Art, Midwest Art, and Southwest Art in the ’90s, and won a grant from the Tulsa Arts & Humanities Council in 1995. She took a long hiatus to teach before returning to writing last year. Sondra lives in Tulsa, Oklahoma. She is completing a memoir, tentatively titled The Kidnapping, for her thesis project.