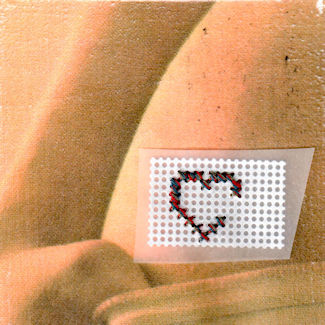 I hate anybody’s bad dream. My newest, right now, the size of a walnut, is the complex cystic structure on my left ovary, which my doctor said has grown larger since last time. It could be nothing. Could be nothing.

I hate the pain everyone is in, at least sometimes, if he or she has ever been born.

Home awaiting results, how to be quiet? It’s like when I was a little girl playing house, and as I pretended to dust, I would wave a hand above a surface chanting dust, dust, dust until Heidi or Barbie would say, Good One, shut your hole! You don’t have to say every what you are doing. But I do say nearly every what I am doing, even still. I say I am alone in my own house and where is instinct?

I am trying, to be here, despite the looming or the distance of death.

Dear Bad One, you’re not so bad. Outside earlier, I picked a fight with a squirrel who careened onto my patio, nut in mouth, again and again. I’d be reading a poem, not thinking about a surgeon who might want to take my ovaries away. I’d see the rodent so close and I’d jump! It would jump, drop its nut and run away long enough for me to get lost in my book again. Ultimately, I whipped its nut at it, intending to miss, which I didn’t. An eternity of self-awareness opened up between the beginning and ending of the dull head-nut thwack. (This isn’t, by the way, the self I’d be documenting for posterity if I didn’t always have to re-remember how to be, be, be.)

Should I call my son?

Remember how Hamlet said he could be bounded in a nutshell and call himself a king of infinite space were it not that he had bad dreams? Even his bad dreams remind me of the size of a nut, which equals the growing complex cystic structure on my left ovary which my doctor hasn’t called about yet, yet, yet.

It’s pretty easy to be alive, says everybody in our best moments. I haven’t even left the yard today and still, even life in a holding pattern seems vast and shocking. “I’m amazed we aren’t more amazed,” says Malena Mörling. This is the line, thanks to that squirrel, I kept rereading, and she’s right. She’s right.
___

Paula Cisewski’s fourth poetry collection, Quitter, co-won Diode Editions’ 2016 Book Prize and her third, The Threatened Everything, was a finalist selected for publication in The 2014 Burnside Review Book Prize. Both will appear in early 2017. Cisewski is also the author of Ghost Fargo, selected for the 2008 Nightboat Poetry Prize by Franz Wright.