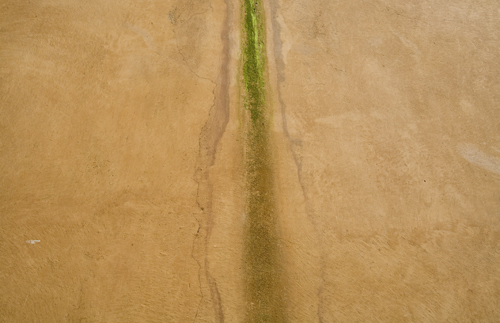 The nurse who preps my mother for surgery is kind. She wears clogs and a smock with balloons and rainbows all over it. Her hair is pulled into a high ponytail. Overhead, the TV is tuned to Good Morning America. The sky over America is popsicle blue.

“I like your uniform,” my mother says, her voice thick, cottoned. “You know, I used to be a nurse.”

“We make the worst patients,” the nurse says. She undoes my mother’s hospital robe. “You’re not going to give me any trouble, are you?”

“Not me,” my mother says, half smiling.

The nurse lifts my mother’s right arm, then her breast out of the robe. The breast lolls to the side, soft and white against blue cotton, like a cloud but heavy, full of rain. The skin is stretched thin, and I can see the veins underneath. The areola is large and brown, and I remember when I was young and first saw my mother naked, how astonishing it was, how I couldn’t imagine ever being like her.

In the shower, her breasts would hang nearly to her waist. Later, when she’d get dressed, she’d have to bend over and lift them into huge pointy cups, first one breast then the other. She’d snap the bra closed, four hook-and-eye clasps, before she’d stand up.

“Be happy,” my mother would say when I was a teenager, hopeless, flat-chested with Band-Aids taped into two flesh-colored x’s instead of a bra. “Be grateful you’ll never have to carry all this weight around.”

Since then, I’ve bathed my mother. I’ve dressed her. I know her body the way I know my son’s, better than my own.

The nurse marks my mother’s breast with a series of small x’s. “To show the doctor where to cut,” she explains.

The marks look like stops on a road map. They look like intersections. The nurse uses a purple marker. On the outside of the marker, there is a ruler and an ad from a pharmaceutical company called Allegiance.

“Here,” the nurse says. She snaps the cap on the marker and hands it to me. “You might as well keep it. We can only use them once.”

The drugs pull my mother in and out of consciousness. The sheets on the bed and the gurney are starched and white, the edges tucked into tight triangles, sturdy and sure.

I’m a child again, sitting on the edge of my mother’s bed, watching her dress for work—her powdered legs, the sharp cut of her calves, her delicate ankles, “Still good,” she says, “The last thing to go,” the white panty hose sheer as communion wafers, a few stray black hairs at the edge of her right knee where the razor always misses, the stiff nurse’s cap, an origami swan she anchors to her dark curls, the picketed row of bobby pins, the square-toed shoes spotless with Sani-White.

“Now I feel more like myself,” she says to me, to the mirror.

I’m a teenager, driving to Braddock Hospital over rutted brick roads, past boarded storefronts and shattered windows, past what used to be the flower shop, the donut shop. “This used to be someplace,” my mother says, illuminated in the passenger seat under streetlights, the pinhole of a camera, a white flash.

She is home, blood on her uniform. I don’t know whose. “There’s only so much anyone can do,” she says.

Before the nurse wheels her away, my mother leans her head to me. “Heart of my heart,” she says, as she’s always said to me, her adopted and only child. I hold onto her hand before the doors to surgery snap open and I have to let go.

I put the purple marker in my purse. Weeks later, I’ll use it to grade student essays. I’ll write things in the margins, like “comma splice” and “cut.” I’ll write “fragment” and “more.” I’ll write, “What are you afraid to say?”

Lori Jakiela is the author of a memoir Miss New York Has Everything (Time Warner/Hatchette 2006) and three poetry chapbooks, including most recently The Mill Hunk’s Daughter Meets the Queen of Sky (Finishing Line, 2011). Her essays have been published in The New York Times, The Washington Post, The Chicago Tribune, The Pittsburgh Post-Gazette and elsewhere. She teaches in the undergraduate writing program at The University of Pittsburgh-Greensburg and in the low-residency MFA program at Chatham University.