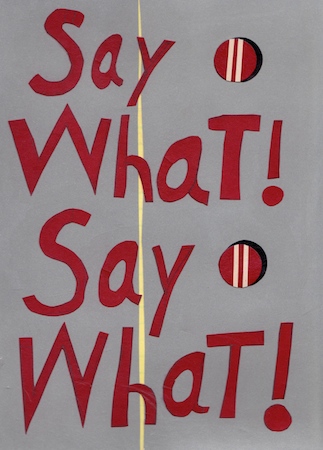 On my third visit to the memory palace I found the king. He was under a table laden with apples. He was wearing that campy red gown, velour, with the white trim, and the crown, too, which had rubies, sapphires, and emeralds in it. Now in this palace also were portraits of warriors and kings along the deep polished, redwood walls. And so I says to the king, I says, What up, King? What up, Apple Dude?

and up the stairs I go and I find my mom at the sewing machine all sewing up our jeans from when we’ve been sliding down the roof and tearing them up, and my mom is all Why can’t you get along and I’m all like Sister’s going to put a cap in the king’s ass if he’s still under that table eating apples and mom is all like That’s ok, she can’t hurt him, he’s the king.

so then we go up a little farther and here’s this recording session going on with Miles fucking Davis only his back is turned and when he turns around blowing fierce and low and peppery hot staccato blasting like gravel on a windshield and then like birds fleeing hunters and then like the low growl of a hound watching the sheriff’s boots in a cool dirt crawl space under a shotgun shack and Miles he turns around and his face it’s all like the ugliest thing you ever saw and I’m like Miles, you was a handsome man, you must have turned ugly in your descent from stardom and giving away your gift, you must have got ugly in your hoarding of your fame, you got to give it away like Ali, man, and he’s all like fuck you white nigger boy and I’m like Mom! Miles Davis cussed at me, he said a bad word! but she’s too busy sewing up our jeans which we ripped sliding down the roof. so I keep going up the stairs because I have been working out.

And up there is President Jimmy Carter listening to “Scrapple from the Apple” by Miles Davis and the king has given him an apple and he is eating the apple and listening to Miles Davis who like me is still angry at Jimmy Carter for being such a pushover and I’m like man, you was a good man but you were weak, you trippy ass peanut farmer, you crazy ass Georgia cracker you should have seen this shit coming but you were too navy-ass Christian contemplative and those rightwing motherfuckers cleaned your clock and look at us now then I’m like what is that term cleaned your clock all about anyway

I kept climbing up the stairs beyond the roof even and up there the memory palace was full of exotic objects I could pick up and imagine, trophies of exotic birds, and stuffed animals on the walls, and Sports Illustrated the entire collection since Issue Number One, and a trunk full of circus balls, and an antique rocking chair, and some Roman coins, and the combination to my junior high school locker which I forgot one time and couldn’t get my gym clothes and suffered crying and ran to the office all upset and man that was the end of my junior high school happiness after which I started drinking and using dope and never forgave the Schlage Company for letting me forget my combination, which it wasn’t their fault anyway.

Cary Tennis wrote Salon.com’s popular “Since You Asked” advice column five days a week from 2001 to 2013. The column now appears somewhat irregularly on carytennis.com. Cary studied William Blake as an undergraduate and Faulkner, Nabokov and Wallace Stevens as a graduate student, but became a journalist anyway. In 2007, seeking a more humane way to interact with other writers, he became an Amherst Writers and Artists workshop leader. He and his wife Norma now organize writing workshops and retreats using that method in Northern California, France, the Netherlands and Tuscany. Among his books are Citizens of the Dream and Since You Asked. His book Finishing School: The Happy Ending to that Project You Just Can’t Seem to Get Done, about how to use the power of mutual support to complete writing projects, is slated for publication by Tarcher/Penguin in the fall of 2016. He is also still working on a novel, which will get done when it gets done, Finishing School or no Finishing School.