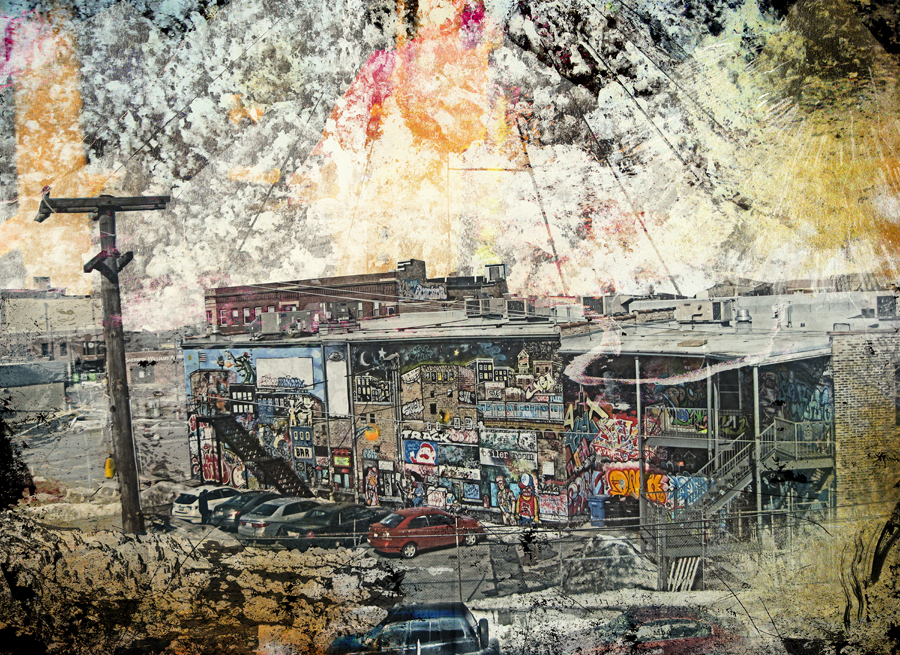 We are in the car driving south on CA-99 toward Anaheim. My sister, Christy, is stretched out in the backseat, my mom is in the passenger seat one leg tucked under her, the other straight, propped on the dashboard, her heel leaving a smudge, filing her nails. I am driving. We’re only an hour into what will be at least a five-hour drive and the conversation has already jumped from which Starbucks is closest to the freeway, to funny pet stories, to politics, to my sister explaining some of the many ways in which the women she works with are awful.

“They’re a bunch of narrow-minded, upper-class, racist white women from Clovis,” she says. “They started talking about ‘illegals’ and I told them what you said, that they aren’t illegal, but undocumented.”

“Then one of them says, ‘Why do you care? You’re not even a real Mexican.” Christy elongates the “e” sound in “real,” and, sitting forward between the seats, her long brown hair swaying against her face, repeats it, “’Not a ‘reeeeeeeal Mexican.’ Can you believe that?!”

“But you’re not,” my mom says, her fingers clawed, rubbing the nail dust onto her pants and looking up. “You’re white, just like me.”

This is a conversation we’ve had many times over the years, though never this bluntly. It’s usually coded, couched in terms of behavior, dress, language. Both parents, independently (because they divorced when Christy and I were young), imparted and modeled appropriate ethnic performance. From my mom’s Scotch-Irish parents, originally from Michigan, came criticisms about letting me spend too much time in the sun; I was beginning to “look more like the other side” of the family. My grandmother suggested putting lemon juice in our hair to make it more blonde, because “everyone knows blonde is prettier.”

On the other hand, my dad and his two younger brothers are the sons of one first-generation U.S. citizen and a bride-immigrant who made month-long biannual trips home across the Mexico border. The training from this side was in some ways a bit more pointed. My dad and uncles often talked about the ills of dating white women: they were prissy, demanding, couldn’t cook. “Act like a Chavez,” was a phrase used like “buck-up” or “be a man,” always in reference to being physically and psychologically strong or stoic, the advice given if one of us were being bullied or came crying with a cut after falling off our bicycle. And if we were too “mouthy,” and talked-back, my tíos would say to my dad, “you better watch it, she’s gonna be just like her mom.” This meant being a like white woman and acting “white” was one of the worst things we could do.

On being called white, I could see in the rear view mirror my sister’s face twitch with restraint.

“No, you’re American,” Mom says, twisting in her seat to look Christy in the eyes. “Your race is Caucasian. There are only three races and Mexican isn’t one of them. All Mexicans are white.”

“Mexicans in this country don’t get treated like white people, and by that logic, all Mexicans are Americans,” I say. “America is the continent and in that continent is both Mexico and Canada.”

“That’s not what I mean and you know it,” my mom says, this time sounding irritated.

“This is getting stupidly P.C.,” Christy sighs, sitting back.

“Besides,” I add, slowing for one of the few lights, “Mexicans don’t think we’re Mexican anyway. We can make all the tamales and chorizo con huevos and menudo we want; we’re just of Mexican descent. So, I guess Mexican-American would be the appropriate term.”

“Nobody calls themselves that,” Christy says, shifting her disgust to me. “Maybe the fancy academic people you work with do, but no real people, no people here say that. You just say ‘Mexican.’”

“Then what do actual Mexicans born in Mexico, call themselves?” I ask.

“So there is no difference between you and a person born and raised in Mexico, speaking Spanish as their first language?”

“Fine. Whatever,” Christy says. “Then what do you call yourself, Ms. PhD student studying ‘La-tino’ literature?” She separates out the first syllable, making air quotes with her fingers – something my dad says only white people do.

My mom reaches over a delicately manicured hand and turns on the radio.

Sarah A. Chavez is the author of the poetry collections, All Day, Talking and Hands That Break & Scar (forthcoming 2017). Her work can be found or is forthcoming in VIDA: Women In Literary Arts, The Boiler Journal, White Stag, Connotation Press, and THEThe Poetry Blog, among others. She is a Visiting Assistant Professor teaching Ethnic American literature and creative writing at Marshall University, as well as acting coordinator for the A.E. Stringer Visiting Writers Series. She is a proud member of the Macondo Writers Workshop.