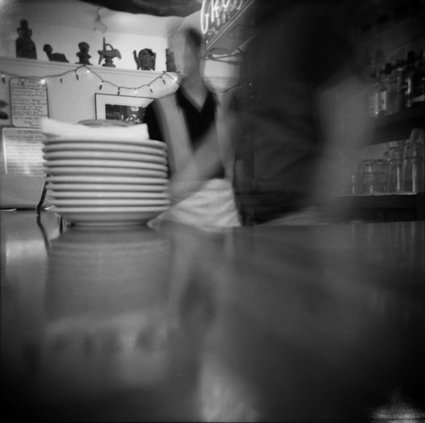 I was doing my daily meditation but also aware I was hungry and craving a hamburger and thinking about getting takeout from the bar down the street with its gruff bartender who always writes up the order, which last time and the time before and, yes, the time before that wasn’t ready by the promised fifteen minutes, and as I was meditating for twelve minutes because that’s all I can go without a break, and becoming mentally unquiet about the possibility of having to confront the bad-tempered bartender, who always answers the phone Yeah?, about why he never puts in my order until after I get there and suspecting he might just tell me off if I did provoke him, as he appears unyoked to the niceties of customer service, and I would likely respond in kind, insensible to my own welfare, but subsequently be too embarrassed and prideful ever to step foot in the place again, and therefore lose points with my wife who likes the bar’s food and who has—to put it euphemistically—“worked with me” about my tendency to overreact, dismissing my claim that I am simply a product of the assertive East Coast and she the sanguine West Coast with a “Nice try, fella,” and I was so fully into detailing this imbroglio with the uncongenial barkeep that steam could have been coming out of my ears, and I had to think, Whoa, I’m meditating here! and get back to my breath, which had of course become rapid with anticipatory rage as I conjured a scenario along the lines of Kill Bill, or maybe just a few choice words of Go fuck yourself and your stupid takeout food! and then the timer went off and pretty much my entire twelve-minute meditation session was for naught, and I thought, hmm, that could have gone better, but I might as well get this over with, and so I dialed the number and sure enough my nemesis answered with his inhospitable Yeah? accompanied by the clamor of drunks in the background, and I took a calm and detoxifying breath and spoke in a nonjudgmental tone with just a smidgeon of hysterical brutality that I wanted to place a takeout order, and he said, “Hi, Steve,” and I was like WTF just happened! and so surprised that he called me by name that I was instantly released of my righteous anger and corrosive self-importance and samsaric attachment to my bumptious bitterness, and so after giving him my order and feeling freed from our oppositional duality, at least on my part, I pushed things a bit further and said, “Could you hold the pickle?” and he said, “Sure, man, no problem, see you in fifteen,” with what I thought was a very, very tiny laugh attuned as a Buddhist bell.
__

Steven Schwartz is the author of six books of fiction, including, most recently, Madagascar: New and Selected Stories. His essays have appeared in The Missouri Review, The Southern Review, Crazyhorse, Gettysburg Review, and elsewhere. He lives in Fort Collins, Colorado.