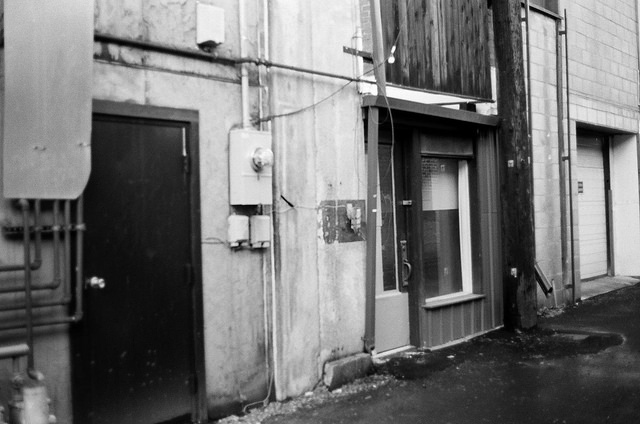 One winter morning after dropping my daughter at daycare, I took the 180 overpass arching into thick fog and, though I knew it well, I couldn’t in that moment be sure where the road actually ended. Suspended between past and future, I disappeared into language and place, weather and love, and I wondered how close I’d come to flying totally untethered, released from the bonds of concrete reality. The path behind was already gone, lost in clouds and vast sheets of gray wool weather; and the freeway ahead only unveiled itself one moment at a time, a swiftly passing window that, if you flew too fast, you’d outrun, maybe miss a car next to you, a chance at clarity, or run the risk of slipping off the edge into air and the hard reality of landing. My own car—thumping with metal at high volume, coffee mugs rattling in the cup holder—seemed suspended then in an eternal present on the 180, between the lines, where already I’d forgotten how my daughter, only three years old, had blurted out, “Goddamnit,” from the backseat, and how, as we pulled into the school parking lot, I told her she shouldn’t say things like that, Daddy shouldn’t say things like that, and then from nowhere it seemed, she also recalled a time when, weeks or months before, I’d been angry at someone parked in front of our driveway, and I’d cursed and scared her with a quick storm of words, a micro-burst of anger that belonged elsewhere; but on the overpass, with the light outside the car so hazy and diffuse, I wanted to hold tight, to remember what I said next, that sometimes Daddy lets the little things bother him, sometimes feels angry and frustrated at the small stuff because it’s easier than trying to change the big stuff, but that he shouldn’t do this, should never scare his daughter with words, and that he’s sorry for the clouds, sorry for the unpredictability of his moods these days. After an outburst she’ll often ask me, “Are you happy again, Daddy?” And that’s a hard question to answer given the current weather in my life. At the park a few days later she will make me a birthday cake from sand. I’ll blow out the twig candles and eat the whole fragile thing in front of her. And if we continue to jump forward through time, weeks later, and settle beneath a similar sun in a different park, perhaps emerging from this long fog, I can see myself again, walking a narrow path, skirting a ridge like a wall, watching my feet fall behind another’s, a smile overtaking my face because above the two of us a red tail hawk whirls in the thermals, and I feel something close to peace. It’s just two people finding a new path. Walking quietly. Below the hills a white egret will spin across the green marsh flats, bursting in my vision like a firework in the night; and I will be sure that the blue has never been so bright and low, the whole weight of the sky hanging just over our heads as if we are children beneath a parachute. My son tells me, “There is no present, Daddy. Technically, everything is the past and everything is the future.” But at least for this moment on the 180 expressway, perhaps I can stay suspended in the present on the overpass into fog, the memory of our conversation on cursing, my daughter’s gambol around goddamnit lingering in the penumbral past, as I sail off blindly into the deep abyss of being a divorced father of two children, catching mere glimpses of clear thoughts through windows in the haze; and perhaps such suspension will help me remember that it’s important not to pass over such moments, to stay in the vehicle of metaphor, moving forward, even if you can’t see the edges or the end, even if the concrete seems to disappear into gray ether, into a terrifying and ecstatic final separation.

Steven Church is the author of The Guinness Book of Me: a Memoir of Record, Theoretical Killings: Essays and Accidents, The Day After The Day After: My Atomic Angst, and the forthcoming collection of essays, Ultrasonic: Soundings. His essays have been published in River Teeth, Passages North, DIAGRAM, The Rumpus, Brevity, Creative Nonfiction, Salon.com, and many others. He’s a founding editor of The Normal School and teaches in the MFA Program at Fresno State.