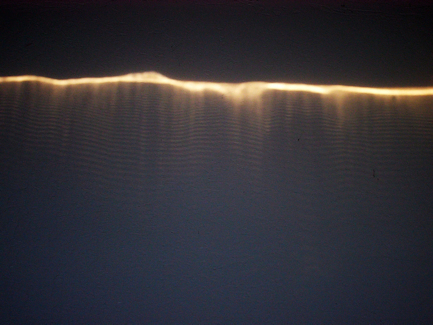 Our friend Shana… her… father… well, she wasn’t born yet. But her father won a live monkey at a drive-in movie. [Sniff.] No time to talk about the… it’s got too many distasteful details in it … nothing bad happens to the monkey, don’t worry. The monkey dies, but of natural causes at an old age. And it wasn’t a really… nice monkey, either. He used to [laughter] pull Shana’s hair. In fact, she used to visit its grave and then yell at it.

There, that’s enough of that story.

Well, I’ll tell you the way he won the monkey. [Laughter.] There was a contest to name the monkey. And, uh, he heard… that the… movie theater manager… he heard a rumor that this guy called his wife “Pruney.” That was his [laughter] nickname for his wife. So he entered the name Pruney [throat clearing; sniff] in the… contest. And this man was so… enraptured when, I guess, he drew the name Pruney out of a hat that he had his winner right then and there.

I will say that [laughter] he gave the monkey to his true love as a… it turned out not to be the exact right thing to give your intended sweetheart.

A live monkey, you know, think hard before you give anyone a live monkey. It’s a lot of responsibility! And if you want a, want a moral to the story, let’s imagine that Shana’s father-to-be had never tried to give his first choice in love a monkey. Well, maybe he never would’ve met Shana’s mother, and Shana may have never been born. She wouldn’t have had her, you know, personality conflicts with this monkey, but at least she was born!

Jack Pendarvis has written five books. He won two Emmys for his work on the TV show Adventure Time.