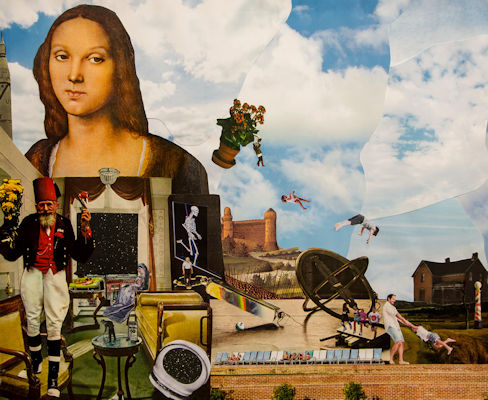 She’s never been good at word problems. She remembers hours of agony at the kitchen table, her father trying to help her wrench the variables of time, speed, and distance into manageable equations. “A freight train left San Diego and traveled east at an average speed of 28 mph. A diesel train left one hour later and traveled in the same direction but with an average speed of 33 mph. Find the number of hours the freight train traveled before the diesel train caught up.” No matter how long she stared at the problem, she couldn’t find a way in. Her father liked to think he was a patient man, but the longer he explained how to solve the problem, the more impatient he became, and the dumber she felt, until finally her brain froze and she stabbed the tabletop with her pencil until the point broke, and he shoved back his chair and walked outside to calm himself.

Now, at seventy, she can manage the simpler calculations. She knows she won’t be around to replace the thirty-year roof she’s just put on her house. She doesn’t need a dental implant that lasts fifty years. When she comes across a future date—the next total solar eclipse in 2052, for instance—she subtracts the present year from it to see whether she’ll be there, and the answer is usually no.

Other calculations are riskier. The word problems of life, she calls them. If a seventy-year-old woman owns two boxes of five-thousand staples and her stapler holds 210 staples per strip, how many staples must she use every day in order to empty both boxes before she dies? How long will it take her to write the pages she’ll staple, because even though she’s sometimes over-tired of the great harvest that she herself desired, she keeps harvesting, but slowly, so slowly, as if she still has all the time in the world?

What troubles her is that while those earlier word problems had answers, even if she couldn’t find them, these new problems always end with an unsolvable X—the date of her death. What troubles her is that those unsolvable Xs are multiplying. One morning last winter she left her house to talk to a group of writers about memoir—notes folded in her purse, directions entered in the GPS—and came-to in the emergency room, asking her son and her partner: What am I doing here? Who’s sick? Where’s the dog? For hours she asked those questions and for hours they patiently answered, but the answers wouldn’t stick. Transient Global Amnesia, the neurologist called it, a blown fuse in the brain that wipes out short-term memory and the ability to form new memories. And even though she jokes now that her brain just went to Jamaica for the day, the world seems full of Xs and holes she could tumble into anytime.

Thinking about those multiplying Xs makes her feel the way she felt, long ago in Catholic school, when the children were told to imagine eternity. Close your eyes, the nuns said, and imagine time flowing endlessly on and on, imagine forever, the place your immortal souls will go and stay. The exercise always made her feel hopeless and small. Eternity is not like wind; you can’t feel it on your face or see it in clouds and trees, flags, grass and sails. No earthly mirror can reflect eternity so how can our senses grasp it?

She hopes she still has time to stop breaking her heart with problems that can’t be solved. Sometimes she thinks she sees a way. She remembers returning to her father’s grave on the morning after his funeral. Over the last two terrible years of his life, she’d spoken to him or seen him almost every day, so going where he was seemed like the natural thing to do. It had rained overnight and pockets of water had collected in all four corners of the blue tent the funeral home had raised. She remembers how she pushed each sagging pocket, watched the water pour out and splash on the ground. She doesn’t know why it made her happy to spill the water that morning or why it makes her happy to remember it now, in spite of the grave.
__

Pam Durban is the author of two collections of short stories, Soon and All Set About with Fever Trees, and three novels, The Laughing Place, So Far Back, and The Tree of Forgetfulness. Her stories and essays has been published in many magazines and anthologies including The Best American Short Stories of the Century, edited by John Updike, and The Pushcart Prize, Best of the Small Presses. She is the recipient of a National Endowment for the Arts Creative Writing Fellowship and a Whiting Writer’s Award as well as the 2001 Lillian Smith Award for Fiction for her novel, So Far Back. She lives in Chapel Hill, NC, and teaches at the University of North Carolina.

previous post Aphorisms for a Lonely Planet
next post The Ethics of Empathy: Techniques for Portraying Antagonists in Contemporary Memoir