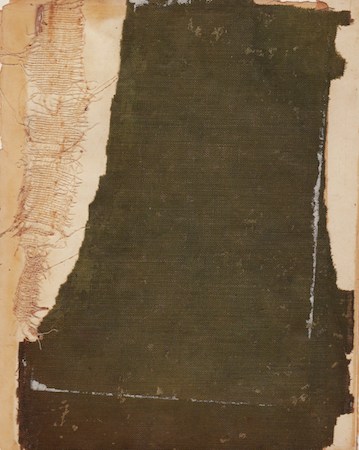 As Jason Murphy’s mom drove us to the farm, I wondered how it would look now that his dad was dead. It had been almost a year. I pictured man-high weeds and rusty tractors, the house dark and empty, the giant barn rotting with its roof caved in and black birds flying out the broken windows. But my first step out of the car was onto freshly mown grass. Jason’s uncle was waving from the front porch of the house. Jason joined me, and we ran toward the barn, which was still standing, and slid open the huge doors. Inside, the light from the upper windows shot down through the dusty air, burning leopard spots onto the floorboards. It smelled of oil and wood and hay, like always.

Jason called me over to the space behind the loft stairs. The frame of an old yellow bike rested on the floor, its pieces scattered nearby. Jason planned to fix it up, he said, so he could ride it that summer. Today he was putting on the handlebars, and asked me to get the tool box.

The box, dented and gray, had been set on one of the mismatched workbenches still lining the walls. Its metallic luster stood out against the dust-covered machine parts lying around it. Here and there I could make out hand prints in the dirty surface, which were probably his uncle’s, but which made me think of Mr. Murphy. Big and dark, part-Indian, he said, ace pilot and WWII hero. Mr. Murphy had always been glad to see me, even after my baby brother died the previous spring, and I spent more time at their farm than usual. He’d never been afraid to put me and Jason, just third graders, to work on one of the junk cars he claimed was not yet beyond hope. That kind of work is good for boys, he’d say, and then place impossibly gentle hands on our shoulders, hands that otherwise swallowed everything they touched, including this box, the one I was now somehow lifting on my own.

Jason held the handlebars out in front of him, twisting them right then left, steering through invisible curves. He set them by the bike and pulled a wrench from the tool box. The wrench was large and grimy, and when it slipped off the nut, Jason’s wrist bent toward the floor, but he didn’t drop it.

He ignored me, just like the last time I’d asked, and the time before that. He put the wrench down and walked outside. I followed him down the long grassy airstrip to the sheet-metal shed with the tattered wind sock on top. We walked around the side, stepping through a thicket of tall grass until we reached a big shoebox-shaped something made of interconnected, metal rods.

“This is the plane my dad got killed in,” he said, stepping inside the charred, rusty frame. He sat down on the bare steel of the pilot’s seat.

I crawled into the space behind him and sat on the wet grass. The last time I’d seen this plane was in a newspaper photo my mom had shown me, its black tail smoking and sticking straight up out of the corn field where Mr. Murphy had been crop-dusting. I was in that same tail, I guessed, but it was hard to imagine that this had once been his plane—no wings, no propeller, no metal skin. Weeds and vines were growing up through it.

“I like to sit here sometimes,” Jason said with his back to me. “I see things.”

I didn’t understand, but then I leaned back on my elbows and let my gaze move up the slope of my friend’s skull and launch itself over the shed, the barn, and into the atmosphere. Up there, the plane’s skeleton vanished, along with my own, until there was nothing but sky. I wondered if this was the same sky Mr. Murphy saw all those times, and the last time. A sky big enough to carry him over any place or time that ever meant something to him—an ancient Indian hunting ground, a battlefield in France, a cornfield in Iowa. Maybe over our own selves right then, sitting on the ground, looking up.

We stayed there a while, long enough for me to know. Then I followed Jason back to the barn. We had work to do.

John T. Price is the author of Man Killed by Pheasant and Other Kinships, Daddy Long Legs: The Natural Education of a Father, and Not Just Any Land, as well as editor of The Tallgrass Prairie Reader. A recipient of an NEA fellowship and other recognitions, his work has recently appeared in Orion, Essay Daily, terrain.org, and True Stories, Well Told: From the First 20 Years of Creative Nonfiction Magazine. He is a professor of English at the University of Nebraska at Omaha, where he directs the Creative Nonfiction Writing Program.