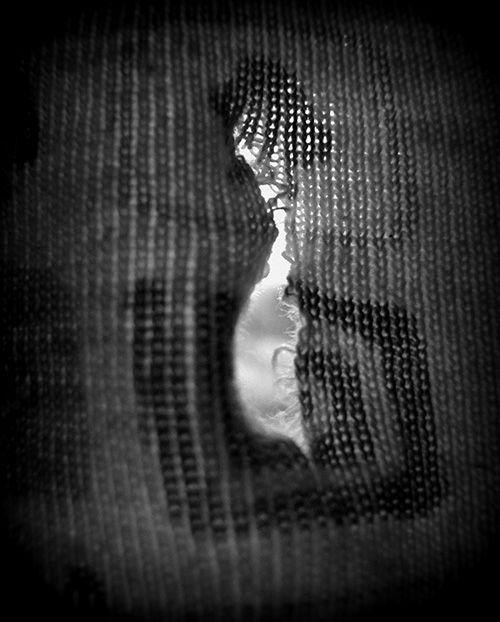 Another time I was talking to Sachiel, the tailor in Boston whose shop on Chauncy Street was essentially a door with a vast and impenetrable space behind it, a wilderness known only to Sachiel, who never moved from his stool by the door during working hours, and we got to talking all metaphysical, as he said, about his work.

Now, what you see of my work is tactile, he said—pants, jackets, buttons, zippers, the occasional nice shirt, although not in your case, your shirts are a despair to me and probably to your poor mother. Whereas what I sometimes think my work is, is holes, do you know what I am saying? A young man like you comes to me because a seam has burst in his jacket, and well it should burst, such shoddy workmanship I have not seen since I was a boy. I repair the hole—I vanish the hole, you see? So my work is vanishing holes. Holes present themselves, like that hole in the breast pocket of this awful shirt you are for some reason wearing today, what is that, Egyptian cotton? Why does someone wear such a thing? Maybe that is good for a man working in the cotton fields near Alexandria, but in Boston I don’t think so. What I am saying is that holes come and I make them go. I am in the business of closing holes. If all was well, if all things kept their composition, then I would have no work. But that is not the way of things. The way of things is that holes open. Not just in battered old suit jackets that mismatch their pants like some young men I know go about the streets wearing for reasons that elude me. But in marriages and civilizations and tribes and clans. You can wonder why holes open, why is the design of a universe in which things fly apart? But then remember that the work is to repair the holes, to make whole that which has flown apart. You see what I am saying? You smile, but I know you understand. You are the newspaper fellow collecting stories. I am only a tailor. But think: aren’t all the stories you collect in the newspaper essentially cut from the same cloth? Each one is in one way or another a story of a hole opening or a hole closing. A criminal, such as, for example, Mayor John Hynes of Boston, can wipe out my entire neighborhood with the stroke of a pen; you report this in the newspaper as news, but really he opens a hole, do you see? Then many people strive to heal the hole. Now, some people will say that the effort to heal holes is itself good. I do not agree. If I tried to repair a hole in your battered old suit jacket, for example, but did not actually do so, what good is that? You would still be jaunting about with a hole the size of a quarter gaping in your seam, embarrassing yourself and everyone you meet, a nice young man with the newspaper but a hole in his jacket, not to mention it does not match the pants. And this is why you are going to leave your poor jacket with me this afternoon, and I will repair the hole, and the universe will be slightly better off. A tailor cannot in one hour repair a hole the size of the entire West End of Boston, but he certainly can vanish a hole the size of a quarter. What kind of a tailor would he be if he could not do that? Just leave it on the counter. I hope your poor mother will not see her son walking back to the newspaper office in nothing but his awful shirt of Egyptian cotton, without even this battered old suit jacket that does not match his pants. It is a good thing your pants do not have holes that I can see, and if they do have holes, do me the favor to not tell me about them this afternoon. A man can only repair so many holes in one day, and just imagine what it is like for me, a professional of long standing, to have to watch you walk away in that awful shirt of Egyptian cotton, for all the world to see? I avert my eyes. Come back by four for your jacket.

Brian Doyle is the editor of Portland Magazine at the University of Portland, in Oregon. He is the author of many odd books, notably the sprawling serpentine sinuous Oregon novel Mink River. (Mr. Doyle recently commented on the origin of this essay on the Brevity blog.)